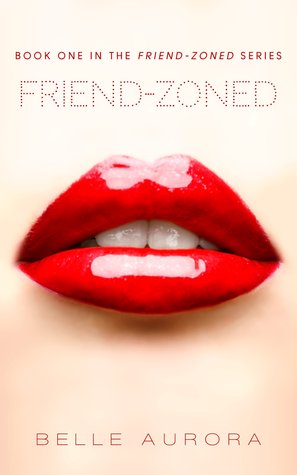 Nikolai Leokov never thought he’d fall in love with the only girl he’s ever befriended.

Valentina Tomic has issues with commitment after the ultimate betrayal.

When Tina decides to make broody Nik’s day better, she never thought she would end up friends with the hard man.

Nik has never had a woman be so affectionate to him without expecting something in return.

Nik and Tina cordially invite you to read Friend-Zoned.

A story of friendship, humor, and love.

I really enjoyed reading “Friend-Zoned” by Belle Aurora. It was the first novel I had read from her, and it probably won’t be the last. I liked the characters and the storyline, however I felt like Tina, the main female character, was perhaps too happy at times considering what she has had to deal with these past five years. But everyone deals with loss and pain differently, so I guess it’s better to be happy than sad. I did like the relationship and chemistry between Tina and Nik, and the fact that all of the secondary characters had more of a part in the overall story than you normally see in other books. I also enjoyed the fact that the story was told from both Tina and Nik’s alternating POV. I liked everyone’s personalities and the sense of humor and sarcasm among them. I’ll be looking forward to reading each of their stories in the rest of the Friend-Zoned series. “Friend-Zoned” had its good and bad moments, but the ending really made up for it and made me so incredibly happy. I love happy endings (Who doesn’t?) and this one really made me smile. :)

Belle Aurora is twenty-six years old and was born in the land down under.
At an early age she fell in love with reading. Boredom one summer had her scouring the bookshelves at home. She stumbled across Sandra Brown’s “Breath of Scandal” and fell in love with romance.
Having been brought up in a loud and boisterous family of Croatian descent, she developed a natural love for dramatics and humor. Only some years ago had she discovered a new love.
Humorous romance novels.
Kristen Ashley and R.L. Mathewson had opened a brand new world where she could lose herself yet feel safe and at home in their stories. Belle has been known to become a screeching banshee while anxiously awaiting their newest titles.
Belle never thought she would write. It had never interested her until recently. “Friend-Zoned” began to form and in February this year Belle typed the words Chapter One. And she fell in love.
With words.
With writing.
With a creative imagination she never knew she harbored.
“Friend-Zoned” is the first in the Friend-Zoned series. Keep an eye out for this cheeky author.