Title: Most Likely to Score 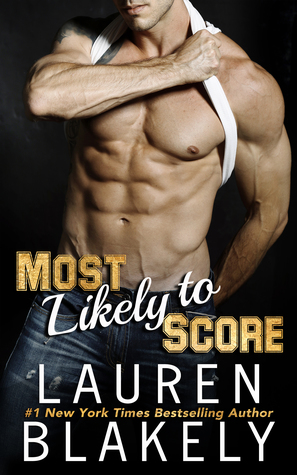 It should have been a simple play…

She needed a football player to step up and be the star for a charity calendar. I needed a sharp and savvy publicist to manage a brand-new sponsorship deal. I scratched her back. She scratched mine. And oh hell, did Jillian ever drag her nails down my back on one hell of a hot night. Okay fine, it was several hot nights on the road.

Now we’re back in town and it’s time to set the play clock back to when we were simply player and publicist.

After all, she doesn’t date players. And given the way the last few years have gone, I can’t risk this deal. But that sort of delay of game doesn’t work so well once you’ve seen someone naked. So when she asks me to help her at an upcoming event— hands off, of course — I’ve got a feeling it might be the hardest night of my life. Pun intended.

What’s a guy to do when he’s always been most likely to score, but the woman he’s falling for is just out of bounds? Find a way to convince her to be hands-on and all-in, body and heart, no matter the risk.

A #1 New York Times Bestselling author, Lauren Blakely is known for her contemporary romance style that’s hot, sweet and sexy. She lives in California with her family and has plotted entire novels while walking her dogs. With fourteen New York Times bestsellers, her titles have appeared on the New York Times, USA Today, and Wall Street Journal Bestseller Lists more than seventy-five times, and she’s sold more than 1.5 million books. In May she’ll release JOY RIDE, a standalone romantic comedy. To receive an email when Lauren releases a new book, sign up for her newsletter! laurenblakely.com/newsletter