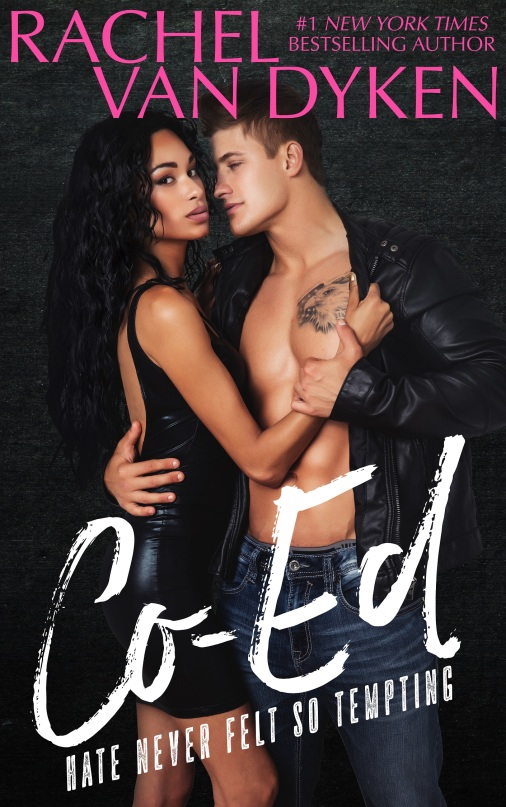 And a revolving door across the college suite I somehow ended up in because my first name is Shawn.

They don’t discriminate. Girls. Guys. Grandmas. Plants (okay maybe not plants) all walks of life stroll in stressed to the brim, and leave so satisfied I’m wondering what sort of talents lie behind that door.

My roommate calls them the pleasure ponies.

But the rest of the college campus?

They just call them the new face of Wingmen Inc. A paid for relationship service that makes big promises.

Breakup? They’ll glue you back together again.

Depressed? They have the magic pill.

Lonely? Just spend a few minutes while they rub you down and you’ll forget all about it.

And broken hearts? Well, that’s their specialty. They’ll fix you

I swore I wouldn’t get involved.

But apparently they like a challenge, and a girl who doesn’t put up with their BS is basically like waving a red flag in front of a bull.

But one holds my attention above the rest.

Knox Turner looks like a Viking — and getting pillaged is starting to look more appealing by the day. Though he’s hiding something — all of them are. And the closer I get. The more I realize that some things are left better in the past.

You’ve read reverse harem books before — but you’ve never read one like this. It’s not what you think, or is it? Dive in and find out…

Knox, Leo, Finn, and Slater are waiting, and they aren’t patient men.

Welcome to the new face of Wingmen Inc — You’re welcome. 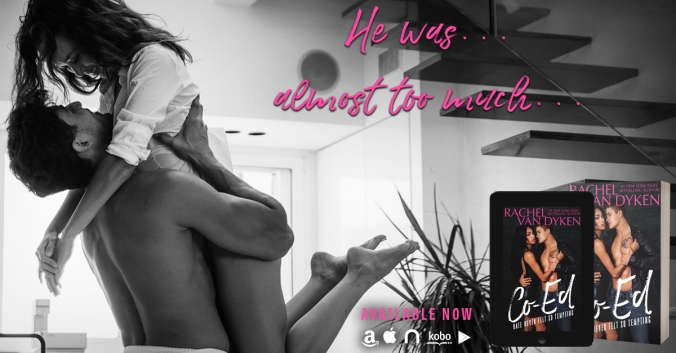 Co-Ed was my first experience with any type of reverse harem, and I really enjoyed it! The storyline and characters were great, and I really liked Rachel Van Dyken’s writing style. The book was different than I expected, but it was a good different. Co-Ed was humorous and entertaining from beginning to end, and I enjoyed almost everything about it.

The characters were very likable and interesting, and I really enjoyed the dynamic between all of them. Knox, Finn, Leo, Shawn, and Slater were all wonderful, and I really enjoyed their personalities and the friendship/relationship they all had together. It was a little rocky at times, but nothing too severe. As I stated above, Co-Ed was my first experience with any kind of reverse harem, and I honestly didn’t know what to expect. It was interesting to say the least, but better than I thought it would be. The chemistry and playful and humorous banter amongst all of the characters was nothing short of interesting and entertaining. They made me smile and laugh multiple times, and I loved the small amount of comic relief. Since Knox and Shawn were the main characters, I really enjoyed reading the book from both of their POV. I liked how their relationship progressed throughout, and I enjoyed their private banter and interactions with each other as well. There were a few parts here and there that I didn’t like as much, as well as certain areas that I would have loved more depth and detail, but Co-Ed was still a very enjoyable and entertaining read from start to finish, and I was happy with the conclusion to Knox and Shawn’s story.

Co-Ed was a sexy, humorous, and entertaining standalone New Adult romance set in the Wingmen, Inc. world, and I would certainly recommend it! Rachel Van Dyken did a great job with this book, and I was satisfied with the outcome to Knox and Shawn’s story. I’m fairly new to Rachel’s books, but I’m looking forward to reading more, especially her new Liars, Inc. series!

It was happening again.

I put a pillow over my face and screamed.

Not because it was too loud.

But because I kept wondering who was causing it. One? Two? All three? Leo and Finn had both tried to talk to me in class and at the coffee shop again. I’d brushed them off but been polite.

Well, let’s just say that Knox had suddenly turned over a leaf that said, “Go out of my way to make Shawn’s life miserable.”

He was suddenly everywhere.

And with a different female every single day.

It drove me insane.

And he wasn’t even mine to go senseless over!

“That’s it!” I got up from my bed, stomped over to the door, and jerked it open. Then I pounded my way over to their room and almost took down the door with my knock .

When Leo answered, he grinned down at me. “Come to play?”

I gave him the finger.

His eyes narrowed. “I’m confused. Is that yes or no?”

“Agh!” I threw my hands up in the air. “I have practice tomorrow at five a.m. It’s three. I’ve had one hour of sleep. Can you please keep the moaning to a minimum?”

“You seem stressed.” He tilted his head just as Finn joined him in the doorway. “Doesn’t she?”

“Very.” Finn nodded then reached out and started massaging my right trap while Leo grabbed my hand and worked my fingers. It felt so damn good that I forgot I was pissed for about two seconds before I pulled away.

“No.” I jabbed my finger at each of their chests. “Shame on you. Stop using your skills to make me less crazy. I need sleep.”

“I could not agree more.” Leo put his hand over his chest. “If you want, I can come over and—”

“No!” I made a fist with my hands. “I don’t need you to help me sleep. I need you to keep your clients quiet so that I can sleep. Big difference.”

Knox appeared then and held out a pair of Bose noise-canceling headphones. “You can borrow them every Friday as long as you don’t set them on fire when you’re done.”

“Do you think I really want whatever STDs are crawling around the surface?” I hissed.

His eyes turned lethal. “Then I guess you won’t sleep.”

“Dun, dun, dun,” Finn sang in a low voice, just as a small lady who could pass as my grandmother made an appearance and shoved a fifty-dollar bill in Knox’s pants then patted him on his rock-hard six-pack. She had a full-on red wig perched backward on her head and cherry red cheeks with black glasses that she kept shoving up her nose. And her purse looked like something I would have seen on I Love Lucy. It was this giant black clutch that probably held cough drops and prunes.

“Love you, Edna!” Finn called while Leo brushed a kiss across her hand.

She finger-waved at Knox and straight-up waddled out of the suite.

I stared after her, my jaw dropping with each step she took until she was out of eyesight.

“She’s at least eighty!” I yelled, so exhausted I was actually arguing with crazy.

Knox got all up in my business and said through clenched teeth, “Her husband died a year ago. She’s not comfortable with internet dating yet. We’re easing her in because she wants a partner for life, someone she can laugh with, so if we can give her that one laugh, that nice touch once a week, we’re going to fucking do it. Now jump off that pedestal, take the damn Bose, and go to sleep.”

Rachel Van Dyken is the New York Times, Wall Street Journal, and USA Today Bestselling author of regency and contemporary romances. When she’s not writing you can find her drinking coffee at Starbucks and plotting her next book while watching The Bachelor.

She keeps her home in Idaho with her Husband, adorable son, and two snoring boxers! She loves to hear from readers!