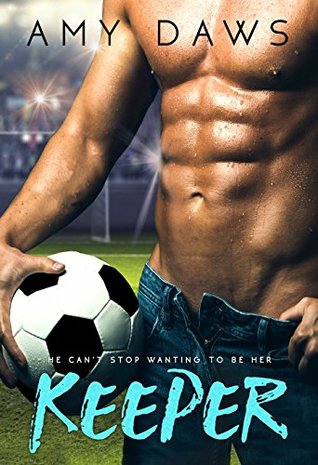 They were best friends until they became roommates.

Booker Harris has spent the last several years pushing himself to become the best goalkeeper in the Championship League. Tired of living in the shadows of his headline-splashing brothers, he has finally carved a path of his own.
As a child, Poppy McAdams was content in her own little make-believe world, until the boy next door with dimples and pained eyes came barreling into her makeshift fort demanding all her attention. Best friends for most of their lives, everything changes when Poppy abruptly leaves London for University.
Now she is back, and gone is the awkward girl from Booker’s youth. She has been replaced by a stunning woman with secrets.
Secrets that Booker is desperate to know.
Sharing a bedroom wall with your best friend from childhood quickly turns to anything but sweet and innocent.

Keeper was another sexy, funny, and entertaining standalone sports romance in the Harris Brothers series, and I really enjoyed it! The storyline and characters were wonderful, and I loved Amy Daws’s writing style and sense of humor. She has done an excellent job with this series so far, and I can’t wait to read the rest in Surrender and Dominate!

The storyline was really good. I love the best friends to lovers trope; it’s one of my favorite sub-genres to read in romance. While the plot of Keeper was entertaining, I wished certain things had progressed differently between Booker and Poppy. There were a lot of frustrating and annoying moments between them, which was disappointing. There was just too much angst and back and forth between the main characters for the book to be a five-star read. However, Amy Daws definitely made up for some of the parts at the end. I was pleasantly surprised by the conclusion, and it made me very happy.

The characters were great. Booker and Poppy were wonderful, and I loved them so much. I really enjoyed their personalities and chemistry together, and how certain parts of their friendship/relationship progressed. I loved reading the book from both Booker and Poppy’s point of view, and some of their banter and interactions with each other. As I stated above, there were a few aspects between Booker and Poppy that weren’t to my liking, and I wished had progressed differently. However, I was extremely happy with the conclusion to Booker and Poppy’s story. Another part I loved were the secondary characters, specifically the Harris family and all of their significant others. It was amazing to see them again, and I loved the depth and entertainment they added to the story. It made it much more enjoyable and entertaining.

Keeper was a sexy, humorous, and entertaining standalone sports romance in the Harris Brothers series, and while it hasn’t been my favorite book from Amy Daws, I still really enjoyed it from beginning to end. Amy Daws did a great job with this book despite some of its flaws, and I was extremely pleased with the outcome to Booker and Poppy’s story. The Harris Brothers series has been amazing so far, and I’m so excited to get my hands on Gareth Harris’s duet in Surrender and Dominate!