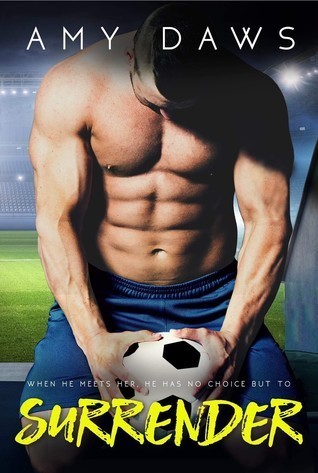 One night of complete surrender is all it takes.

Gareth Harris is Manchester United’s reclusive star defender. He has control over all aspects of his life. But a lifetime of supporting his siblings and filling in for an emotionally absent father has taken its toll.

Sloan Montgomery is a clothing stylist whose world was turned upside down when she found herself pregnant and moving to Manchester with a man who was never supposed to be her forever. Now recently divorced and struggling with shared custody of her daughter, control is a fleeting concept for this American living in England.

Both Gareth and Sloan are in need of a release.

No one could predict what happens when both of their defences are down.

Surrender is part one of the Final Harris Brother Duet and concludes with Dominate. This duet reads great on it’s own, but to maximize enjoyment, check out the first three brothers’ books in Challenge, Endurance, and Keeper.

I’m not quite sure how to start this review. I have really enjoyed the previous books in the Harris Brothers series, and I was so looking forward to finally reading Gareth Harris’ duet. I hate to even say this because I’ve loved Amy Daws’s previous books that I’ve read, but unfortunately Surrender wasn’t what I expected or hoped it would be. Maybe I had too high expectations, I don’t know. I just couldn’t fully connect with this book, and found myself trying to finish it as soon as possible. I loved Gareth and really enjoyed seeing several familiar characters from past books, but I had a difficult time connecting with Sloan. I also didn’t completely love the relationship between Gareth and Sloan, and wished it had progressed differently. There were a few other aspects that I didn’t like, and overall I was disappointed. I guess I’m in the minority when it comes to loving Surrender. Although Surrender wasn’t for me, I don’t want to discourage other readers from giving it a try, and I sincerely hope you do. Despite some of the negatives, however, I still want to know how Gareth and Sloan’s story ends and the Harris Brothers series concludes. It has been a wild ride with these four Harris Brothers, and even though I didn’t love Surrender like I hoped, I’m looking forward to reading Dominate.