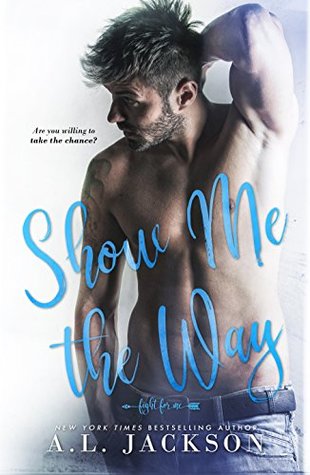 Rex Gunner. As bitter as he is beautiful.

The owner of the largest construction company in Gingham Lakes has been burned one too many times. His wife leaving him to raise their daughter was the last blow this single dad could take. The only woman he’ll let into his heart is his little girl.

Rynna Dayne. As vulnerable as she is tempting.

She ran from Gingham Lakes when she was seventeen. She swore to herself she would never return. Then her grandmother passed away and left her the deed to the diner that she once loved.

When Rex meets his new neighbor, he knows he’s in trouble.

She’s gorgeous and sweet and everything he can’t trust.

Until she becomes the one thing he can’t resist.

One kiss sends them tumbling toward ecstasy.

But in a town this size, pasts are bound to collide. Caught in a web of lies, betrayal, and disloyalty, Rex must make a choice.

Will he hide behind his walls or will he take the chance . . .

Show Me the Way was a sexy and emotional standalone contemporary romance, and I really enjoyed it! The storyline and characters were wonderful, and I loved A.L. Jackson’s writing style. Show Me the Way was my first novel from this author, and I’m looking forward to reading more, especially the rest of the Fight for Me series.

The storyline was good, but unexpected. It had been a while since I’d read the synopsis for Show Me the Way, so I didn’t fully remember what the story was about before diving in. It was definitely an emotional roller coaster filled with a lot of heartbreak, turmoil, and anguish, which I wasn’t prepared for. There were a lot of moments that I loved, but also ones that I didn’t. There were some parts that were difficult to read and get through, at least for me, but they might not be what you’re thinking. Show Me the Way was more serious and emotionally draining than I thought it’d be, but I still really enjoyed going on Rex and Rynna’s journey.

The characters were great. Rex Gunner and Rynna Dayne were wonderful, and I loved them so much. I loved their personalities and red-hot chemistry together, and how most of their relationship progressed throughout. I loved reading the book from both Rex and Rynna’s point of view, and most of their banter and interactions with each other. Rex’s daughter, Frankie Leigh, was absolutely adorable and completely stole my heart. I love when young kids are in books, and she was such a sweet and lovable child, and I couldn’t help but smile when she was in a scene. I loved Rex and Rynna’s friends as well, but there were two characters that I loathed with my entire being, and they were the main reason I gave Show Me the Way four stars instead of five. Rex and Rynna had a lot of drama and emotional baggage from their pasts that bled into the present, and it was a lot to absorb and process. Rex and Rynna’s story had plenty of trying moments throughout, and while it wasn’t an easy journey, I was very happy with the conclusion.

Show Me the Way was a sexy and emotional standalone contemporary romance, and while I didn’t love everything about it, I would recommend it to anyone that loves drama, angst, and tons of emotion in their romance novels. A.L. Jackson did a good job with Rex and Rynna’s story, and I was pleased with the outcome. Show Me the Way was my first A.L. Jackson experience, and I’m curious to see what the rest of the Fight for Me series will bring.

A.L. Jackson is the New York Times & USA Today Bestselling author of contemporary romance. She writes emotional, sexy, heart-filled stories about boys who usually like to be a little bit bad.
Her bestselling series include THE REGRET SERIES, CLOSER TO YOU, BLEEDING STARS, and FIGHT FOR ME novels. Watch for A.L. Jackson’s upcoming novel, MORE OF YOU, the first stand-alone novel in her brand-new CONFESSIONS OF THE HEART SERIES.
If she’s not writing, you can find her hanging out by the pool with her family, sipping cocktails with her friends, or of course with her nose buried in a book.
Be sure not to miss new releases and sales from A.L. Jackson – Sign up to receive her newsletter http://smarturl.it/NewsFromALJackson or text “aljackson” to 24587 to receive short but sweet updates on all the important news.
Website | Newsletter | Facebook | Reader Group | Twitter
Instagram | Amazon | BookBub | Goodreads