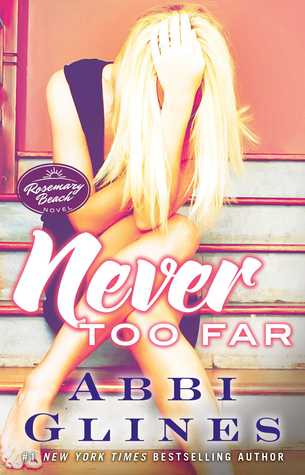 Our relationship had been short. Intense and brief. I wondered what it would have felt like to curl up in Rush’s arms anytime I wanted. To know I was safe and that he loved me. We’d never had that chance.

Just when Blaire allowed herself to fall for her stepbrother, Rush, he revealed a life-altering secret so devastating that she couldn’t forgive him. Unable to face him again, Blaire leaves the promise of true love behind in Rosemary Beach and returns to the comforts of her small town in Alabama, wanting nothing more than to put the summer behind her.

But unexpected news complicates Blaire’s plans, and she’s forced to trust the one man she shouldn’t. Trapped between Rush’s fierce desire to win her back and her own sense of self-preservation, Blaire doesn’t know if she’s doing the right thing . . . or if she’s making the biggest mistake of her life.

“Never Too Far” was freaking incredible and even more amazing than “Fallen Too Far!” This second installment of Rush and Blaire’s story was truly phenomenal and even more addictive than the first one. There were plenty of pleasant, and some not-so-pleasant, surprises that left me craving for more, as usual. :) I loved that it was told from both Rush and Blaire’s alternating POV. It was awesome to see Rush’s side of things and what he was thinking/feeling. I fell even more in love with Rush and Blaire and I seriously cannot wait to read the conclusion to their story in “Forever Too Far!”