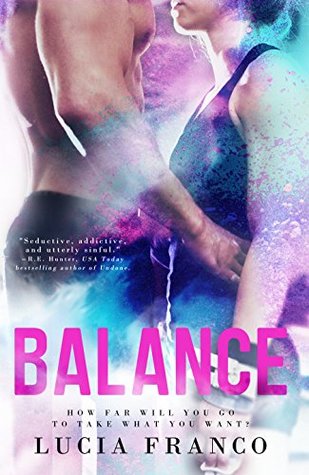 Adrianna Rossi is no stranger to the rigorous demands required of her body. Years of pain and determination make her one of the best. Olympic glory is the ultimate goal, and she’ll do anything to achieve it. Even if that means leaving home to attend World Cup Academy of Gymnastics, a training center that serves one purpose—producing champions.

Perfection, precision, and dedication are required of his athletes. When two time Olympian Konstantin Kournakova is persuaded into training the young hopeful, he immediately regrets it. She doesn’t come close to his high standards. As the relentless pursuit of her dream keeps her striving, a passion is ignited within him.

Kova’s power and domination, coupled with Adrianna’s fierce tenacity, reveal there is more for her body to learn. Every interaction can be misconstrued, but there’s no mistaking the darkening of his gaze, the lingering of his touch, or the illicit image of his bare skin pressed against hers. Integrity is on the line. One toe off the beam and their forbidden desires could ruin everything they’ve worked for, throwing it all off balance.

When I first came across Balance, I was excited to give it a try because 1) I had never read a gymnastic romance before, 2) it was a forbidden romance, which I seem to really like for some reason (don’t judge!), and 3) it was by a new author I had never tried.

I really enjoyed the characters and concept of the story, as well as Lucia Franco’s writing style. Adrianna was a strong and independent heroine that seemed a lot more mature than her sixteen years, and Kova was strong-willed and had a domineering presence that was at times intriguing and annoying. I liked their relationship and chemistry together, but I was severely disappointed this book had cheating in it. That really made me upset, and I definitely wasn’t expecting that to happen. It almost made me not want to continue reading the story, but it is a long book and I was already a good part of the way through it to just quit. Plus I wanted to see what would happen between Adrianna and Kova. I was yet again blindsided when I got to the end of the book and found out it ends in a cliffhanger. I had no idea Adrianna and Kova’s story would not be finished in Balance. I’m not a huge fan of cliffhangers, or having to read more than one book in a series to finish a couple’s story, unless I’m really addicted and committed to it and them.

With all of that being said, I really did enjoy the gymnastic and forbidden romance aspect, and I also really liked Hayden and Avery – Adrianna’s close friends. I will probably give the next book in the Off Balance series a try, but I haven’t completely made up my mind yet. Just take into account some of the things I mentioned in this review before starting Balance.

I don’t want to hurt anyone’s feelings or bash their work, because I could tell that Lucia really put a lot of hard work and effort into writing Balance, and the last thing I want to do is discourage her. My opinion is only one of many out there and I don’t mean to cause offense to anyone, especially the author. I always try to be honest in my reviews, and I’m sorry if this one was hurtful in any way, that was most definitely NOT my intention.

A competitive athlete for over ten years, Lucia Franco currently resides in sunny South Florida with her husband and two boys. Paranormal romance was her first love, but she has a soft spot in her heart for small-town and reunion romance stories.

When Lucia is not hard at work on her next novel, you can find her relaxing with her toes in the sand at a nearby beach.