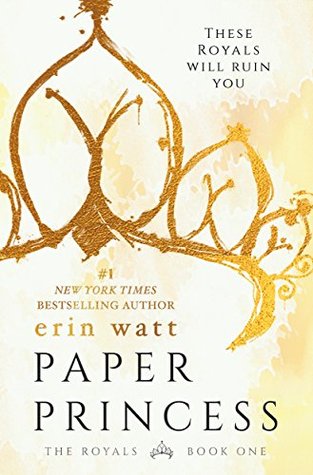 From strip clubs and truck stops to southern coast mansions and prep schools, one girl tries to stay true to herself.

Ella Harper is a survivor—a pragmatic optimist. She’s spent her whole life moving from town to town with her flighty mother, struggling to make ends meet and believing that someday she’ll climb out of the gutter. After her mother’s death, Ella is truly alone.

Until Callum Royal appears, plucking Ella out of poverty and tossing her into his posh mansion among his five sons who all hate her. Each Royal boy is more magnetic than the last, but none as captivating as Reed Royal, the boy who is determined to send her back to the slums she came from.

Reed doesn’t want her. He says she doesn’t belong with the Royals.

Wealth. Excess. Deception. It’s like nothing Ella has ever experienced, and if she’s going to survive her time in the Royal palace, she’ll need to learn to issue her own Royal decrees.

Paper Princess was definitely an interesting read and not at all what I expected it to be. I kept hearing rave reviews from almost everyone online, so I had my hopes up pretty high that I would really enjoy this book. I will admit it took me quite a while to get into the storyline and characters, but once I did I just had to keep reading more. Ella Harper definitely had a hard life, and for only being seventeen years old, she was going through and putting up with a lot of crap. Almost too much for someone that age. At times it felt a bit unrealistic, however I’ve never had to deal with her specific problems before, so I guess I can’t really judge anything on that respect. It took me a long time to warm up to the Royal boys because in the beginning they were real douchebags to Ella. I eventually really ended up liking them, namely Reed and Easton, and I’m hoping the relationship continues to improve amongst all of them. A lot of the problems that were dealt with in this book could be annoying at times, but overall it was a good read. I knew the story was going to end in a cliffhanger, and even though it frustrated me to no end, I had to know what happened next. I will warn everyone that even though this is listed as a Young Adult, it was definitely a MATURE YA novel. Despite certain elements that I didn’t care for in Paper Princess, I still enjoyed this book and will definitely be reading the next installment that is luckily told from Reed’s POV!